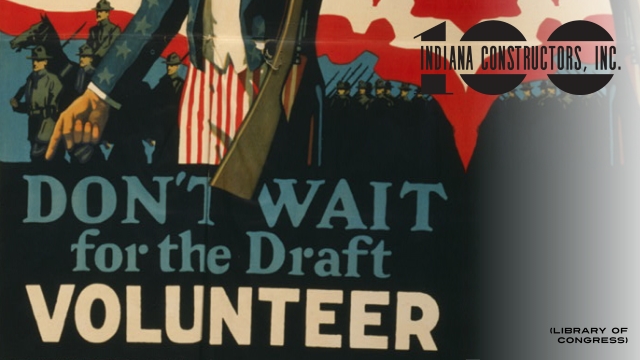 When I started working for ICI in 2019, my first project was to sift through boxes upon boxes of member files, labor agreements, board of directors minutes, invoices, and letter correspondences from the last one hundred years, but few were as interesting as Lawrence E. Jenkins letters.

I have found lots of cool stories, like Carl Fisher’s hot air balloon stunt or the ghostly interchanges in Indianapolis.

Some of my favorite Indiana history stories, however, come from World War II and the letters of Lawrence E. Jenkins. We have letters providing firsthand accounts of the time, from those experiencing wartime rations, public works programs, and/or military service.

This story is specifically about the draft. 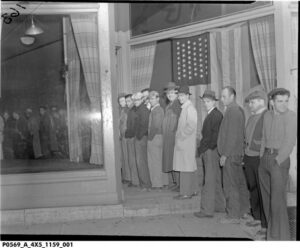 Lawrence E. Jenkins was an operating engineer for Magaw Construction (acquired by Milestone Contractors, L.P. in 1982) in Richmond, Indiana. At 34 years old, he had a wife and four children under the age of 11. Because of poor health, Jenkins was classified as IV-F, meaning unfit for military service. 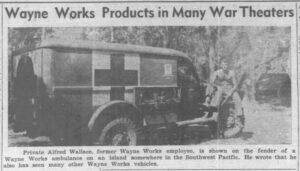 In December 1944, local business Wayne Works contacted Magaw asking if they could spare any employees during the construction off-season. Before the war, Wayne Works manufactured school buses, but their wartime production included mobile machine shops, military buses, and military ambulances.

An experienced operator and mechanic, Jenkins transferred to Wayne Works for the winter.

Changing jobs during the peak of the war wasn’t a simple task. Jenkins had to get a referral card from the United States Employment Service stating that he was a borrowed employee to be returned in the spring.

However, once he returned to Magaw Construction in April 1945, Jenkins received a draft notice. He was scheduled for induction on May 21, 1945.

According to the U.S. Employment Service’s record, Jenkins had voluntarily quit Wayne Works while under a deferment and had been reclassified as I-A, meaning available for service. 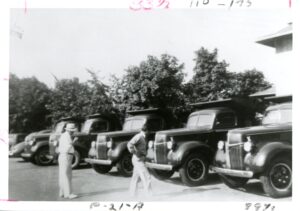 W. L. Magaw, the owner of Magaw Construction, scrambled to get the mishap sorted out—he would have retained Jenkins over the winter as a mechanic if Wayne Works hadn’t requested additional employees.

“Since our equipment and plants must have experienced operators, we can not replace Mr. Jenkins with his experience,” wrote Magaw to the Huntington County Selective Service Board. “At the present time, there are no men available for training…It was not our intention to lay off our key men, but to accommodate [Wayne Works] and to be of assistance to every war effort.”

Magaw contacted the Director of Selective Services in Indiana, the Appeal Board of the Huntington County Selective Service, a local attorney, and Bill Holland of IHC. Nobody could give him any good news.

“I have taken the matter up with the local board, and frankly, I see no chance by which he can be deferred,” wrote Claude Cline, Huntington County attorney. “The case having reached its present stage, there is absolutely no chance of doing anything at this end of the line.”

Click the thumbnails below to view the full-size image. 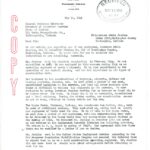 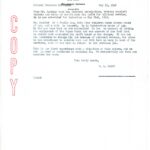 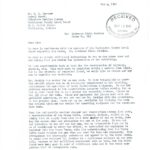 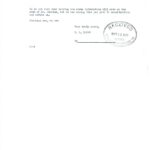 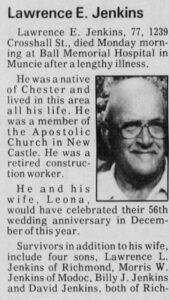 I’m not sure if Lawrence E. Jenkins actually went to war—WWII ended on September 2, 1945. His obituary states that he died in 1988 after a long illness. At age 77, he had six children and 14 grandchildren.

I do know that he was not the only Hoosier highway, road, and bridge builder to enter the armed forces during the war. Another time, I’ll write about Lieutenant Commander Robert H. King, who served as IHC’s chair for three years while stationed at the navy yard in Mare Island, California.

Until then, I want to hear the stories and see the photos that have been passed down to you. What feats did your parents or grandparents accomplish? How about the older coworkers who took you under their wing when you started in the field decades ago?

Fill out this submission form and I’ll be in touch.