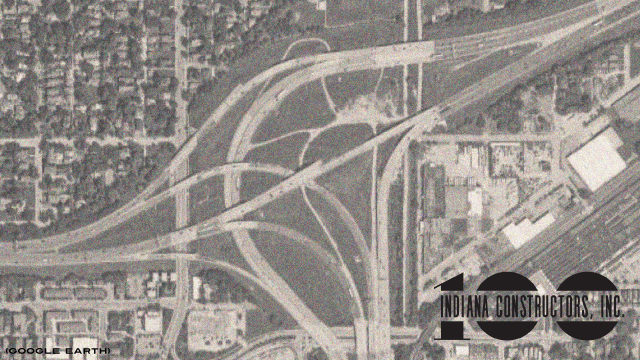 Built-in 1968, it now operates at capacity and has reached the end of its useful life. By the time the project is completed, the interchange will have a smaller footprint, improve safety and eliminate bottlenecks due to weaving.

You may be wondering, how are we able to expand this interchange without securing any additional right of way.

Also known as ramps to nowhere or stub ramps, a ghost ramp is a stub on a road that doesn’t connect to anything. Oftentimes, stubs are built onto a road in anticipation of connecting it to another road soon.

Early plans for the North Split had I-69 connecting from Castleton to downtown Indy. This route went by many names: the Northeast Freeway, the Northeast Expressway, and I-165.

By the early 1980s, the proposed freeway fizzled under impassioned citizens and continuous no-win solutions.

To put everything into context, let’s rewind to the beginning.

From the mid-1940s until Indianapolis’s consolidation into Unigov in 1970, “Indiana-no-place” was in decline. As former Mayor Bill Hudnut once said, one could shoot a cannon through the middle of downtown after 5 p.m. and not hit a single person.

In 1967, Mayor Richard Lugar assembled a task force to draft legislation to consolidate the governments of Marion County and Indianapolis. In 1969, the Indiana General Assembly passed the Unigov legislation, adding about 250,000 new residents to Indianapolis overnight.

During the same period, another transformational project was underway: the Interstate Highway System.

From Naptown to Crossroads of America

In 1964, State Highway Commission Chairman David Cohen expressed the need for connecting I-69 to the Inner Loop. Hamilton County was rapidly growing, and a huge goal of the Inner Loop was to bring those people in.

However, the federal government, which took on 90% of the interstates’ costs, refused to fund this leg.

In the 1965 Indianapolis Star article “Highway Commission Squares Away On ‘Inner Loop’ Face-Lifting For City,” Paul M. Doherty reported, “The freeway plan…has provision for future addition of…a ‘north-east leg’ freeway that could connect with I-69 from Fort Wayne at Castleton.

“Federal officials at present are refusing to include [the ‘north-east leg’] in the interstate program…State officials hope to get them built some way, sometime.”

No Way, No Time

The Northeast Expressway would have come at a significant cost to those who lived in its path, especially from downtown to 38th Street.

A 1980 report by the Community Service Council of Metropolitan Indianapolis stated that 500–700 residential properties would have needed to be cleared; 200 of which would have been multi-family residences.

Neighborhood residents petitioned, canvassed door-to-door, and showed up at public hearings. In the end, they swayed influential people to their side, like U.S. Senator Birch Bayh, and the extension was halted not with a whimper, but a snarl.

All that’s left of I-165 are the ghost ramps at the North Split, and those too will be gone soon.

However, the North Split was built in the 1970s with a bigger footprint than it needed at the time—and that extra room, along with modern design techniques, set us up for success to bring the interchange up to date.

Have you worked on a project with a rich history attached to it? Do you remember a local project that was transformational to your community? Do you know any additional history of I-165?