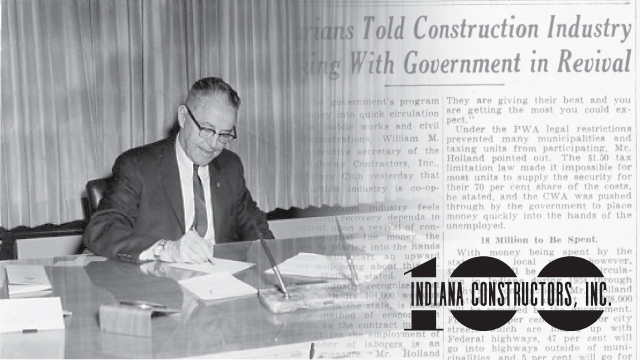 Throughout the last 100 years ICI, Inc. has only had five on-staff association leaders. The first, and the longest-standing, was William M. “Bill” Holland.

Of all the longtime members that I, Sara Marshall, have interviewed, not even one was around at the same time as Holland (which isn’t an unreasonable ask, since he was active in the association through 1964, was honored at ICI’s 50th anniversary in 1974 and died in 1976.)

So, by pulling testimonies from association ancestors, as well as combing through countless correspondences from Holland’s 41 years as Executive Secretary (plus an additional 11 years as a consultant after his retirement), we can properly honor Holland.

The Best Person for the Job

“You know, boys,” said Meredith, as indicated by the board minutes, “the life of the association depends upon its secretary – its hired secretary…He is the one on whom all the load is going to rest – on his shoulders.”

“I can say this for Mr. Holland,” said M.P. O’Connor. “If he says he will come with us, I have sufficient confidence in him to know that he will do whatever he says he will. As to his efficiency, we cannot, no matter where we seek, find a more intelligent chap, or a more likable chap, or a man who could do better work in a legislature than Mr. Holland.”

“Personally,” said “Doc” Smith, “I think we cannot get a better man in the state.”

Meredith and Smith visited Holland at his office at the Portland Cement Association, where they asked Holland to take the job as Executive Secretary.

Holland told them that he would take the job, but on these three conditions:

Holland picked up the phone on his desk. Within five minutes, the association had 25 members.

Holland was described as articulate, scholarly, and a perfectionist. He was well-versed in the law and often gave legal advice. And, back before there was an easy way to keep everyone on the same page (like with ICI’s weekly newsletter), Holland took it upon himself to collect and distribute information to the association members.

In ICI’s 50th anniversary book, John F. Kelly recalled a time when he got a reaction out of Holland.

It had been a tough year for all the contractors – work was scarce and cheap. Holland reported at the annual meeting that the association had $15,000 in the treasury.

Kelly made a motion that, since everyone had such a bad year, they should split the money up amongst the active members.

“John,” said Holland, “you only come to one directors’ meeting a year. From now on, you can stay away from it.”

A Pioneer of Industry Stability

While Holland brought innumerable advancements to the roadbuilding industry, perhaps the feat he was most proud of was the development of a rigorous, forward-thinking public relations program.

He understood that the biggest inhibitor to better roads was not necessarily money or engineering problems – it was people.

To appeal to this human element, Holland was devoted to keeping the public informed by forming Indiana Highways for Survival. “All we have to do,” said Holland, “is tell people the facts.”

Today, you know this program as Build Indiana Council.

A Solid Foundation for the Future of ICI, Inc.

James G. Newland, the successor to Holland, wrote that Holland had the uncanny ability to make decisions based on fact and reason, but also call upon his dreams and imagination on what the highway industry could become.

Newland wrote that in all the years that he worked under Holland, he never heard someone speak ill of Holland’s character.

It’s fitting, then, that the man who built our association from the ground up has the same honest, hardworking characteristics that Hoosier roadbuilders hold today.

Join us in Celebrating the History of ICI, Inc.

Do you remember Bill Holland? Or his successor, Jim Newland? If so, please tell us your stories!