Building a Workforce to Build Our Roads 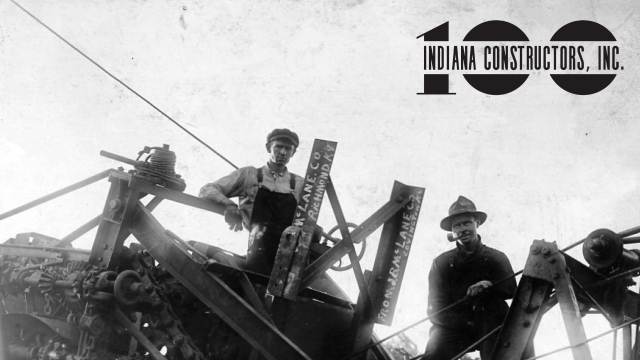 From its start in 1924, Indiana Highway Contractors, Inc. (IHC) strove to stabilize the highway, road, and bridge construction industry.

Many of IHC’s committees began because of a need for industry-wide standards. A united approach would help improve the quality of roads and promote fair competition. 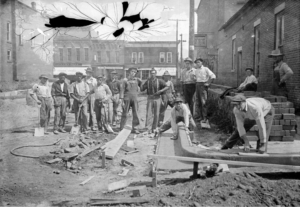 While trade unions in America can trace their roots back to the late 1700s, union membership expanded during the Great Depression.

One of President Franklin D. Roosevelt’s signature New Deal measures, and the turning point for union membership, was the National Industry Recovery Act of 1933 (NIRA).

Section 7(a) of NIRA protected the right to collective bargaining, limited work hours, and established a minimum wage. Two years later, the Wagner Act created the National Labor Relations Board (NLRB), an independent agency with the power to enforce employee rights.

With union membership rising, especially among skilled craftspeople, the IHC Board decided the best way to maintain fair competition was to form a labor committee. 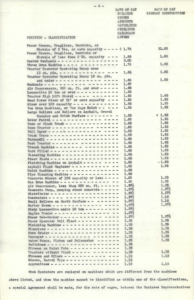 Wage rates from a 1945 contract with the International Union of Operating Engineers, Local #841. Click to enlarge.

The first contracts negotiated and signed, with no less than 51% of the membership’s approval, were with the International Union of Operating Engineers; the International Hod Carriers, Building, and Common Laborers’ Union of America; and the United Brotherhood of Carpenters and Joiners of America.

To ensure the quality of the first industry-wide agreements, IHC Executive Director Bill Holland sent the agreements to a Pennsylvania attorney. In a letter dated July 23, 1937, Edward H. Cushman, Attorney at Law, wrote,

“[The union agreements you sent me] are among the fairest, from the point of view of the employer, which I have seen, and I hope to be able to procure the adoption of some of these fair provisions in this territory.”

To read a contract from 1945, only nine pages long, click here.

Members large and small continue to be engaged in the negotiations process and in the administration of the various fringe benefit funds associated with each contract.

The terms of each collectively bargained agreement may have changed over time, but these agreements continue to protect both workers and employers while providing Hoosiers with the highest quality, safest roads.

What are your experiences with labor unions? Have you served on the ICI labor committee, or are you an Indiana Labor union member? Share your story by filling out this submission form.