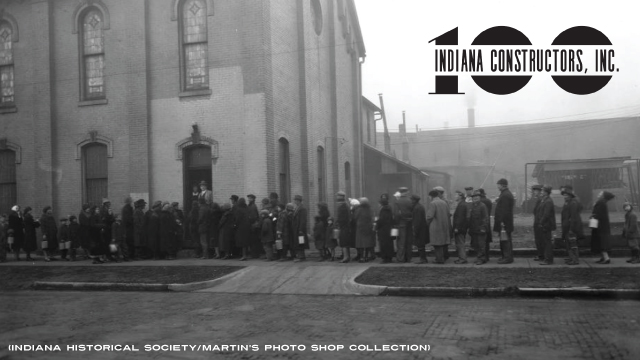 While many industries significantly slowed down—or stopped altogether—during the height of COVID-19, the Indiana Department of Transportation (INDOT) invested a record-breaking $2.08 billion in more than 1,400 capital construction projects and $462 million in 560 local roads, bridges, sidewalk and trail projects in 2020. Helping to keep road workers employed.

In times of duress, the heavy highway and utility construction industry are one of the most stable career options out there, especially in Indiana with our fully funded 20-year road and bridge plan and statewide matching grant programs. There has never been a better time to look into starting a promising career as a road worker.

And this wasn’t just a 2020 phenomenon—we’ve seen grand infrastructure investments during other critical moments in history.

Today, we’re going to wind it back to one of the most famous eras for construction stability: the Great Depression.

A Safe Investment in Troubling Times

While President Herbert Hoover would not call for direct federal intervention in response to the recession, he did believe infrastructure was a wise and appropriate use of federal dollars.

In 1930, President Hoover signed a $300 million, 3-year federal road bill, and the Department of Agriculture (which was the governing body of the Office of Public Roads) increased federal road spending to $1.6 million.

In response, Indiana added 40 additional miles to its 1930 highway program and launched a winter road maintenance program in 1931.

The plan wasn’t perfect, of course. In 1932, the State Highway Commission reduced its engineering personnel by 50%, and a special legislative session diverted half of all gas tax and license fee revenue to Indiana counties, cities and towns.

There just wasn’t any activity at all—no state work, no county work, no work, period. We went out and took painting jobs with the foremen to try and make a living. I remember when one company got a paving job…they paid 15 cents an hour for wages. They would alternate help—one hour on, one hour off. And that wasn’t all. In those Depression days, there would be a lot of boys waiting there in case somebody got hurt or fell out so that they could step in. They would be there all day, hoping something would happen.

In Indiana, the State Highway Commission set out to employ 10,000 people with a $1 million road-widening project. A separate road and bridge widening program provided more than 26,000 jobs in the same year.

Many local newspapers credited highway, road, and bridge construction for providing crucial jobs for Hoosiers at a time when other industries suffered.

Construction Stability Stronger Than Ever for Road Workers

Just as crucial as it was almost 100 years ago, the infrastructure and transportation construction industry was one of the few businesses deemed essential by state and national governments during the COVID-19 shutdowns.

In the face of a difficult year, INDOT’s leadership and strategic planning not only kept Hoosier infrastructure running, but also kept thousands of people employed.

ICI’s member companies did not miss a beat in 2020.

History in the Making

Every story is important in our industry’s history, whether it’s from one year ago or 100.

Your contribution matters. How did you and your company innovate in 2020? What stories do you have to tell?

Looking for additional content? View the route towards settlement in Indiana in this blog.