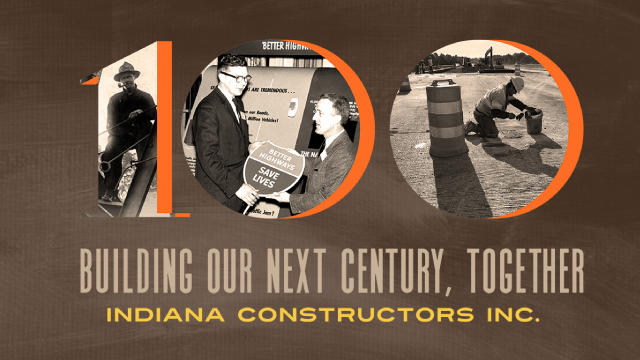 Roads are paramount to improving the quality of life. They connect communities by allowing people and goods to travel easily from one place to the other.

But you already knew that.

Indiana’s infrastructure didn’t happen overnight. Our ancestors had to assemble, lobby, and, quite literally, build the foundation that we see today.

From now through ICI’s centennial in 2024, we’ll be posting stories and historical tidbits about Indiana’s roadbuilding journey over the last 100 years.

But first, let’s start at the beginning.

The Long Road to Better Roads

Road by Elkhorn Cemetery, Richmond, IN, circa 1890 (The Indiana Album/Joan Hostetler Collection)

At the start of the 20th century, most Indiana roads were little more than dirt trails. Anything with wheels (or hooves) risked potholes, sharp turns and severe flooding.

Farmers were the key advocates for better roads in Indiana. Once reluctant to pay taxes for roads they didn’t believe would benefit them, farmers quickly changed their minds when the Office of Public Roads created the Rural Free Delivery program.

There was one caveat: for postal workers to deliver mail to rural addresses, the roads needed to be drivable.

Thus, the Good Roads Movement was born, and soon after, the Indiana State Highway Commission. Today, we know this agency as the Indiana Department of Transportation.

One Hundred Years of Advocacy

It started with Barrett Law bonds. County treasurers were not honoring bonds, and individual contractors were having trouble influencing legislation to resolve this problem.

These contractors knew they needed the strength in numbers of an association.

In 1924, several contractors from all over the state met in Indianapolis, where they adopted the association’s bylaws, elected officers and discussed who would be fit to serve as executive secretary.

The man for the job was William M. “Bill” Holland.

Whatever the industry needed, Holland was on it.

Holland was adamant that the association abide by these principles:

The same values that Holland and ICI’s founding members held importantly are still with us today.

Stay Involved with the ICI Centennial

This is just the beginning. Keep checking back as we continue to cover 100 years of Indiana road-building history.

Eager to help with the ICI centennial by submitting photos, subscribing to the podcast, or joining a committee? Click here to get started.